The Hickory Nut Gorge is a unique mountain wilderness area that spans nearby Rutherford County and includes such places as Lake Lure, Hickory Nut Falls, Chimney Rock Village and the well-known Chimney Rock attraction at Chimney Rock State Park. Historically, there was a turnpike that ran through the Hickory Nut Gorge which later led to the establishment of a stagecoach in the 1830s that ran round trips from Rutherfordton to Asheville. This led to a major economic boom in the area and it was later, in 1880, that Jerome B. Freeman bought the 400 acres of land that included Lake Lure and what would later become Chimney Rock Park NC. His purchase only cost him 25 dollars during that time. In 1885, Freeman made moves that would solidify this area as a vacation paradise when he opened Chimney Rock Park NC to the public. A few years later, he added the first stairs that led to the amazing views from atop the Chimney Rock. In 1902, Freeman sold the park and Lake Lure NC to Dr. Lucius B. Morse who intended to create a park development and town of Lake Lure. Chimney Rock Park NC remained in the Morse family until it was sold to the State of North Carolina to become Chimney Rock State Park NC. 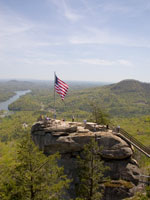 Chimney Rock Park NC is home to the enormous monolith that looks out at Hickory Nut Falls and gorgeous Lake Lure NC, which sits in the valley below. Hickory Nut Falls is an legendary Waterfall in Western NC that was featured in the movie The Last of the Mohicans and it falls some 404 feet into the Rocky Broad River and gorge below. There are numerous things to do at Chimney Rock Park NC, the most obvious being snapping photographs of the breathtaking scenery seen from this location. There is a gift shop at the rock and there is even an elevator built into the rock to take you most of the way up to the view if the stairs are a bit too much for you. You can hike to the top of the falls or check out the base below. You will never forget the awe-inspiring scenes you’ll see here. In the early spring, you can check out the fragrant wildflowers that grow out of the rock formations, and by late April the azaleas are in full bloom. There are also picnic tables at The Meadows general area that are perfect for lunches and snacks. Explore the Hickory Nut Gorge and Chimney Rock Park NC near the vacation rentals in Western NC at Alpine Village Townhomes.

Lake Lure North Carolina is a town named after the 720-acre scenic lake. Lake Lure NC has been called one of the most beautiful man made lakes in the world as it is surrounded by the Hickory Nut Gorge wilderness, Chimney Rock and the Pisgah National Forest. Spend the day enjoying the Lake Lure Beach or take a quick dip after you visit Chimney Rock Park NC. Lake Lure North Carolina is a short drive from the Burnsville NC vacation rentals at Alpine Village Townhomes.

Interested in other fun vacation activities near the Burnsville NC vacation rentals at Alpine Village Townhomes? Click to read about the other great Western North Carolina attractions such as Biltmore Estate North Carolina, the historic Orchard at Altapass, the Quilt Trail, the resorts that offer North Carolina snowskiing, the well-photographed waterfalls in NC and Linville Caverns in North Carolina. All of these great places and things are just a drop in the bucket when you consider all of the amazing things that you’ll find to do and see in the Burnsville NC Mountains.

If you need information about any of our services, please feel free to use our contact
form, send us an e-mail to rentals@alpinevillagetownhomes.com, or give us a call at (727) 389-3404.